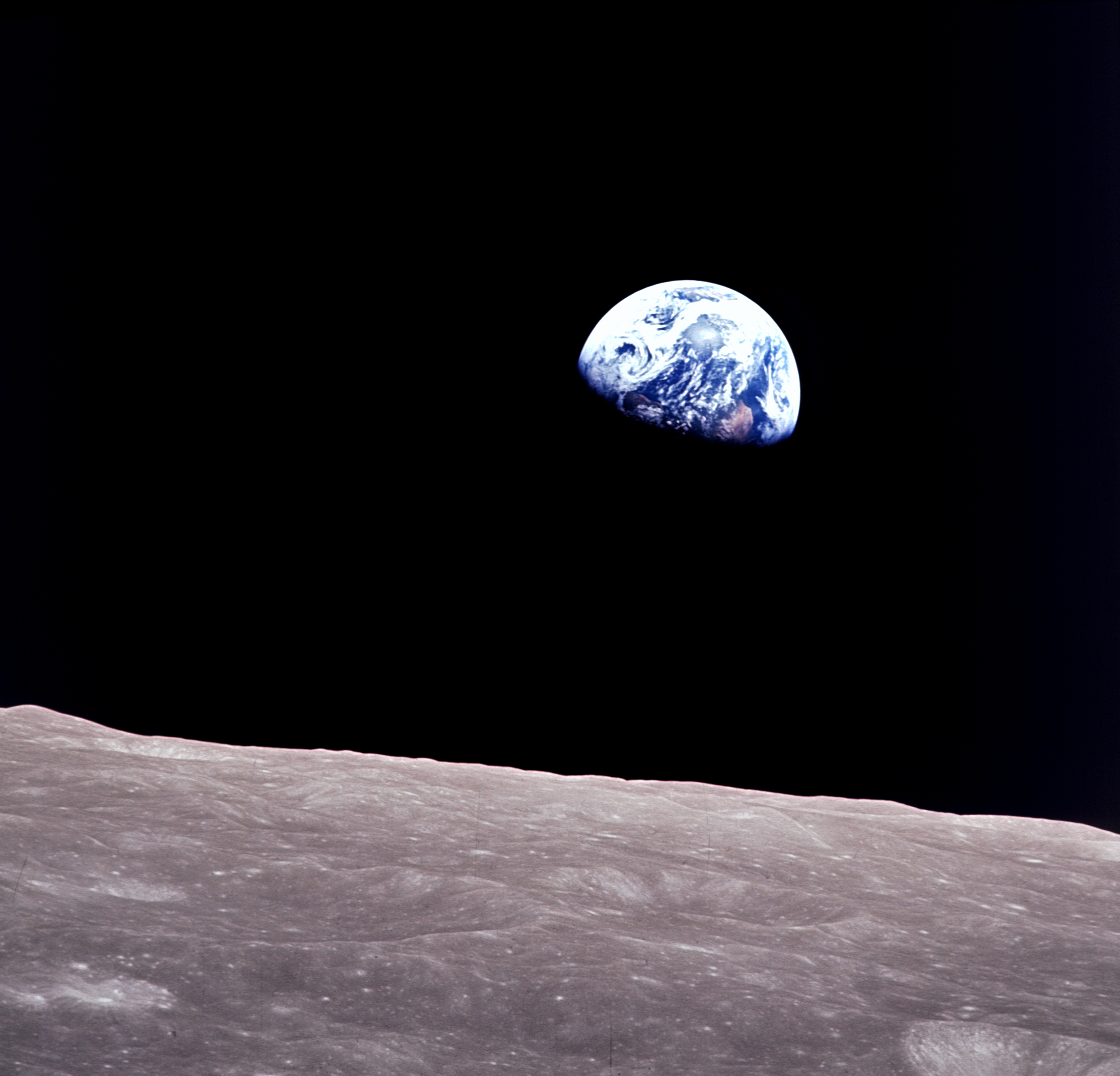 NASA photo (The famous “Earthrise” photo from Apollo 8, the first manned mission to the moon.)

On Wednesday, November 28, at 1 pm, join us in the TCC NE J. Ardis Bell Library for a presentation highlighting the Apollo 8 Manned Spaceflight.  TCC NE professors Raymond Benge and Dr. Kevin Barrett will inform us about why it is important to remember this historic space flight that will observe its 50th anniversary in December.

If you’d like to hear the Christmas Eve 1968 message from the book of Genesis the astronauts beamed back to Earth from the moon, click on the link below.
https://youtu.be/ToHhQUhdyBY

Two of the important events that occurred during the Apollo 8 flight were:
First humans to journey to the Earth’s Moon.
First pictures of Earth from deep space taken by astronauts.

For more information about the Apollo 8 flight go to NASA’s website at:
https://www.nasa.gov/mission_pages/apollo/missions/apollo8.html

Join us on the upper level of the library on November 28th from 1-2 for this presentation. Light refreshments will be served.

Raymond Benge, Associate Professor of Physics and Astronomy, TCC NE Campus, gave a presentation on solar eclipses that informed and intrigued the audience at the J. Ardis Bell library on October 17. Professor Benge started out explaining exactly what a solar eclipse is and demonstrating with a globe and ball what the positions of the earth and moon would be in an eclipse. He went on to explain why we don’t see eclipses every month because of the slight differences in earth and moon orbits.

In 1878, Fort Worth, Texas, happened to be a hotspot for science observation when seven astronomers set up telescopes on a farm located where the hospital district is now just south of downtown. Because observation of the sun was mostly possible at that time during total solar eclipses, the group of astronomers from Harvard University traveled to Fort Worth to study the Sun’s corona, chromosphere, and the solar magnetic field. The NE Campus Heritage Room has a donated copy of an 1878 photo of the astronomers with their telescopes set up for the observation.

Professor Benge traveled to Tennessee for the total solar eclipse of August 21, 2017. This was his first observation of a total solar eclipse and was practice for upcoming eclipses that will be viewable in the DFW area. During the recent 2017 eclipse, he was able to observe differences in shadows, light, temperature, and bird and insect behaviors.

Upcoming Texas viewable solar eclipses to place on your calendar:  October 14, 2023—a deep partial eclipse, and April 8, 2024—a total solar eclipse visible in the DFW area. Keep your fingers crossed for clear skies!

During the month of August 2017, the J. Ardis Bell Library celebrated the total solar eclipse in a variety of ways. We purchased and gave away 100 eclipse glasses, printed 20 pinhole projectors on our 3D printers, and gave away pinhole viewer bookmarks and informational brochures. We welcomed a number of people on eclipse day either picking up glasses, watching NASA TV live streaming of the event across the country, or in front of the library viewing the partial eclipse and taking photos. Book displays and a looping digital presentation about the eclipse were also popular during the month. Here are some photos of the celebration in and out of the library as a reminder of the excitement of this event. Get ready for the next total solar eclipse for North America which will include Texas this time – April 8, 2024!

Look in the sky! Is it a bird, is it a plane? No, it’s a solar eclipse! Get ready because on August 21, 2017, the U.S.A. will be in the viewing area to see a total solar eclipse for the first time in almost 40 years.
Even though viewing the total eclipse is possible only in a narrow path from Salem, OR to Charleston, SC, most all of the country will be able to view the partial eclipse.

A total solar eclipse happens when the moon passes directly between the earth and the sun. Historically this event has been perceived by the ancient Chinese as the sun being eaten by dragons, as mystical or magical, and often was seen as the predictor of a major upheaval of governments or change in leadership. In the last 100 years scientists have taken advantage of solar eclipses to study the sun in a way that can’t be done when viewing directly. Because it is dangerous to look directly at the sun, pinhole projectors, eclipse glasses, and other devices have been designed so that people can actually observe what’s happening.

The J. Ardis Bell library at TCC NE Campus will be participating for the month of August by having a display of items, such as pinhole projectors, eclipse glasses, and books to check out. We will have a digital presentation looping on our digital screens. Also, there will be free handouts, bookmarks, and some giveaways, including eclipse glasses while they last. On August 21 from 10:00-3pm we will have live streaming of the total eclipse from NASA TV in the library classroom — NLIB 2102. Come for some refreshments and a chance to watch some of the event. The next chance we get in the U.S.A. is April 8, 2024 when Texas will be part of the total eclipse viewing area. Below are some links to more information.

If you happen to remember hearing something about Pluto lately or have always been fascinated by astronomy, come check out the October NE library display. Raymond Benge, Associate Professor of Physics and Astronomy at TCC NE Campus, is coordinating a library display on astronomy for the month of October with various astronomical models, images from the Hubble Space Telescope, and other items and books to catch your interest. Professor Benge is also putting together a slide presentation for a digital display for the month.

Professor Benge has an interesting background and plenty of exciting stories to tell about astronomy. As a child who grew up in Houston, his family encouraged his interest in science and they made many visits to the Johnson Space Center during the heyday of the United States space program. His dream was to become an astronaut, but because he had vision problems that would keep him from becoming a pilot, he decided to instead major in astronomy in college. During his college years he was a teaching assistant, he was in charge of astronomy labs, he was director of operations for an observatory, and other physics and astronomy related positions. He has a Bachelor’s degree in physics from Duke University, a Master’s in physics from Texas A&M, and did doctoral studies at UNT. After teaching part-time at DCCD, Collin College, and TCC, he accepted a full-time teaching position at TCC NE Campus over 15 years ago. His favorite thing about teaching physics and astronomy is when he sees students getting flashes of insight. In his classes at NE Campus, he’s had students who discovered unknown asteroids (see link to article below) and has had students who have gone on to get doctorates in physics and astronomy.

In addition to his academic activities, Professor Benge has served on many TCC NE Campus and TCC District committees, as NE Campus Faculty Association president and as a member of the Faculty Senate.

One of my favorite tales of his experiences involves his ride on the “Vomit Comet” in January 2009. With funding from the NASA Education Office, he and a team were given a chance to ride the NASA “Weightless Wonder” plane that flies to 30,000 ft. to experience weightlessness. The experiment his team did was on harmonic oscillation in multiple different gravities. See the article below that describes another team’s experience on the “Vomit Comet”—so called because many experience nausea along with the weightlessness.

Sources related to this article: