Have a Happy Holiday Season!

The NE Library and the Northeast Veterans Association invite you to participate in our Holiday Mail for Heroes Program! Come to the library to sign a card for service members, veterans, and military families this week!

If you would like to donate your leftover holiday cards, we will be happy to use them! We do not need envelopes, and we cannot accept cards with glitter due to potential respiratory problems of any service member who may currently be hospitalized.

See the flyer below and ask any library staff member for additional information! END_OF_DOCUMENT_TOKEN_TO_BE_REPLACED

Whether you think about Thanksgiving according to the 3 Fs: Food, Family, & Football, or you really get into the spirit of gratitude for the holiday, there is actually a lot of interesting history related to “Turkey Day”. I read an article many years ago that I have not been able to locate again. The newspaper article revealed the research done by a food historian or an anthropologist in pinpointing the area where a person’s grandmother grew up according to the foods the family served at the Thanksgiving meal. I’ve read several articles lately that reveal various traditions surrounding the dishes that families demand that usually they don’t eat at any other meal during the year. One family demanded a sauerkraut dish that had to be placed on the table, but that nobody ate a bite of. I think that’s a little bit crazy, but even though I’ve added a few dishes through the years since I’ve been cooking Thanksgiving meals, my family does demand certain foods that really prove the point the food historian had about where your grandmother grew up. END_OF_DOCUMENT_TOKEN_TO_BE_REPLACED

Welcome to the 3rd issue of Judie’s Virtual Reading Room.

In this issue I am introducing new initiatives which will occasionally appear both virtually and in print in real-time in the library. In Spotlight on Reviews, I will focus the Spotlight on Guest Reviewers – on who they are and what they think about their chosen book.  My first guest reviewer is from the Business and Social Science Division’s Government & Paralegal Studies Department. Please join me in welcoming long time Adjunct Faculty member, Dr. Barry Smith  Check out your colleagues review at Spotlight on Reviews. END_OF_DOCUMENT_TOKEN_TO_BE_REPLACED 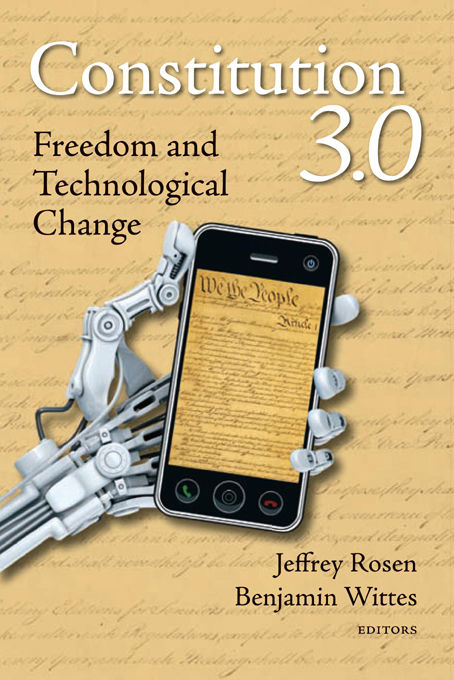 Constitution 3.0: Freedom and Technological Change,  edited by Jeffrey Rosen and Benjamin Wittes, and published in 2011, addresses galloping technological growth and its impact on civil liberties.   A major issue of technology today is that, in its exponential growth, it allows more and more people to do more and more things more and more easily and more and more interdependently, for better or worse, with a complex maze of consequences.  Most of these consequences will affect government and politics in some way.  Rosen and Wittes address these issues through an edited collection of articles chosen to provide a variety of perspectives.  The unifying theme is the impact of technology on the U.S. Constitution, and most of the contributors are legal scholars.  Ironically one of their conclusions seems to be that the Constitution and the courts will become less directly relevant in the future, and they end up addressing primarily other political issues.The authors address essentially these issues: Internet security, electronic surveillance, censorship of the Internet, neuroscience, and genetic engineering.  Two of their startling examples of things that are actually happening are that Google is attempting to put as many of the existing surveillance cameras as possible on the Internet for public viewing, and that Amazon has on at least one occasion (because of a copyright dispute) deleted a book from all Kindles.  Think of the possible consequences for privacy and censorship.These provocative essays are a useful resource for living in the “interesting times” we now face.

I have a Ph.D. in political science from what is now the University of North Texas, specializing in political theory and bureaucratic politics, an M.A. in political science from The University of Texas at Arlington, an M.A. in public administration from The University of Texas at Austin, and a B.A. in economics from the University of Texas at Austin.  While in graduate school, I was a teaching assistant at UT   Arlington, and a graduate teaching fellow at UNT. This was followed by a year as an instructor at Panamerican University.  Since then, I’ve been an adjunct instructor of government at Tarrant County College for about 16 years, as well as teaching at Navarro College, Richland College, Trinity Valley College, and North Lake College.   Along the way, I’ve been an intern in the Texas Governor’s Office, a claims investigator for the Texas Employment Commission, president of the Adjunct Faculty Association at Richland College, a sometime activist in party politics, and a candidate for Texas state House of Representatives.  The book Constitution 3.0 reflects my interest in civil liberties issues.